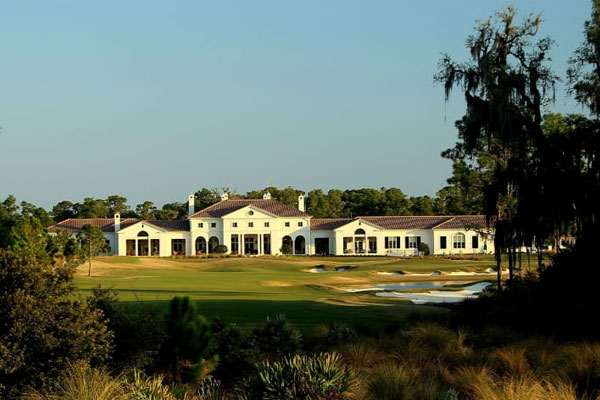 The WGC-Workday Championship at The Concession will kick off a four-week Florida Swing. (David Cannon/Getty Images)

Due to logistical challenges posed by the COVID-19 pandemic, the World Golf Championships-Mexico Championship is now the WGC-Workday Championship at The Concession, a Jack Nicklaus/Tony Jacklin co-design in the Bradenton-Sarasota area in Southwest Florida.

The tournament will kick off a four-week Florida Swing that also features the Arnold Palmer Invitational presented by Mastercard, THE PLAYERS Championship and The Honda Classic.

The World Golf Championships event will be staged without general admission ticketed spectators but will have a limited number of club members and invited guests on-site for competition days. It will also include a Wednesday pro-am, plus honorary observers.

Here are five things about The Concession Golf Club:

1. It’s named for an act of sportsmanship.

Nicklaus conceded a 2-foot putt to Jacklin on the final hole of the 1969 Ryder Cup. The gesture, known as “the concession,” guaranteed the first tie in Ryder Cup history. The United States still retained the Cup with the tie, but it would have won the Cup outright had Jacklin, winner of the 1969 Open Championship and 1970 U.S. Open, missed the short putt.

“I don’t believe you would have missed that, but I’d never give you the opportunity in these circumstances,” Jacklin recalled Nicklaus telling him.

The Concession, which features no houses lining the course and where “the natural setting is the star,” was named “Best New Private Course” by Golf Digest when it opened in 2006. It is the only design collaboration between World Golf Hall of Famers Nicklaus and Jacklin.

It also features a par-3 course, The Gimme, that golf.com called one of the world’s 25 best.

2. Some of the top players know it well.

Bryson DeChambeau won the 2015 NCAA Championship at The Concession, becoming the first SMU golfer to capture the NCAA individual title, by one stroke over C.T. Pan.

3. The par-5s actually have teeth.

The Tampa Bay Business Journal lists The Concession as having both the highest course rating (76.7) and slope (155) in the Tampa Bay area. The short, dogleg-right eighth is its signature hole and is recognized as one of the best par-4s in the state. It features water that comes in at the front of the green, which places a high emphasis on the approach shot.

The course is known for its spectacular bunkering, exciting green contours and especially its stellar par 5s, which make up four of the five most difficult holes on the course. The most memorable of these is perhaps the risk/reward 13th. The tee shot is a forced carry over water and the green is guarded by the course’s most expansive bunker complex.

4. Long Islanders may be reminded of another course.

Nicklaus worked on this course while he and Tom Doak were doing Sebonack Golf Club, another highly regarded collaboration in Southampton, New York, and later said the small, heavily contoured greens at The Concession were inspired by those at Sebonack.

Par is a good score on the 486-yard, par-4 finishing hole, which features a narrow tree-lined opening off the tee followed by an approach shot to an elevated green that is guarded by bunkers in the front and water to the right. Players will likely contend with a headwind on the 18th.