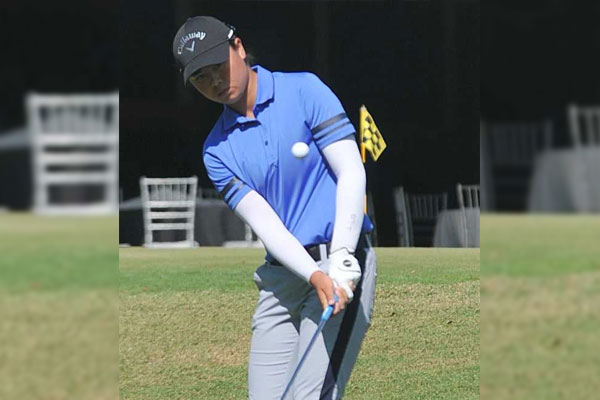 Yuka Saso salvaged an even par 71 and into the money race of the rich US Women's Open now led by fellow LPGA of Japan Tour campaigner Hinako Shibuno in Houston, Texas Friday.

After blowing a four-under card and a short stab at the lead of women's golf premier championship Thursday, Saso went for accuracy rather than length at the Jackrabbit course they consider a bit easier than Cypress Creek but with narrow fairways and greens. But the Fil-Japanese still grappled with her driver, missing eight fairways while going out of regulation seven times.

But she called on her superb short game to rescue a number of pars for a one-birdie, one-bogey round that came after a 69 at Cypress Thursday.

The 19-year-old ICTSI-backed ace, who broke a par-game at the back with a birdie on No. 18, also finished with a decent 29-putt stint although she missed improving to joint third with a muffed three-foot birdie putt on No. 6 that would have negated her bogey on the fifth.

With a 140 aggregate, the ICTSI-backed ace, the leading player in JLPGA's money race, fell farther back by five at joint sixth as Shibuno cashed in on her fine form and blitzed the Jackrabbit side of the Champions Golf Club with a 67 to take firm control at 135.

But while Saso had a trouble-free roll to the weekend, Bianca Pagdanganan saw her consecutive cuts made in the LPGA Tour disappointingly end at eight as she crumbled at the finish after a fiery start and burying an eagle on No. 13, giving up four strokes in the last five to hobble with a 75 for a 147. She missed the 66-player cut by two strokes.

Recalling the form that netted her a breakthrough major win in the British Open last year, Shibuno came away with six birdies in calm conditions to negate her two bogeys as she surged ahead by three shots over Swede amateur Linn Grant heading to the final 36 holes of the $5.5 million event which offers $1 million to the winner.

Grant held her ground against the seasoned campaigners and shot a second 69 for a 138 while Kaitlyn Papp, another amateur, carded a 68 to tie fellow Americans Stacy Lewis, who also fired a 68, and erstwhile leader Amy Olson, who stumbled with a 72, at third at 139.

Pagdanganan, however, won’t be joining the war she was very much into until she went on a spell and yielded precious strokes in the last five holes.

The Tour’s driving leader, who tied for 37th with a 72 start, barged into the Top 10 with three birdies in the first five holes. But she lost her touch and rhythm from there, bogeying No. 7, dropping two strokes on the par-5 ninth, and yielding shots on Nos. 10 and 12 to fall off the leaderboard.

But she eagled No. 13 to draw level par in the day and one-over overall but fumbled with another double-bogey on No. 14 and bogeyed the last two to finish with a 39 and a 75.