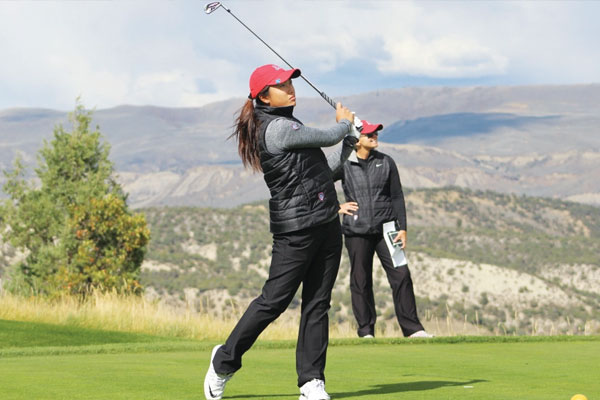 Bianca Pagdanganan wants to inspire next generation of PH golfers

Filipina golfer Bianca Pagdanganan wants to fulfill a greater purpose even as she pursues her dreams of becoming a world champion in her sport.

The 23-year-old burst into the scene in the 2018 Asian Games, where she won individual bronze and helped the Philippines secure team gold. Since then, she has won individual gold in the 2019 Southeast Asian Games and made a splash in her first season on the LPGA Tour.

Together with Yuka Saso -- her teammate in the 2018 Asiad squad who won individual gold -- Pagdanganan is raising the profile of golf higher than ever in the Philippines.

"Something that I've always wanted to do is, of course, inspire the next generation, and hopefully inspire more girls to pick up the sport," said Pagdanganan during a recent press conference where she was introduced as the latest ambassador of Smart Sports.

"I think we've shown a lot of good things coming out from golf, and we've seen players excel," she added.

Pagdanganan is especially hopeful that her rise will inspire young Filipinas that there is a future in golf. She recalls that in her youth, "there weren't a lot of female golfers around me."

"I kinda wish that there were more," added Pagdanganan, who played collegiate golf for Gonzaga and University of Arizona. "I grew up with a lot of guy friends just playing the sport."

"But with where I'm at right now, I hope I get to inspire young girls and show them that golf actually opens a lot of opportunities for women like me," she also said.

Through golf, Pagdanganan was able to get an education and represent the Philippines in international events; she may even end up playing in the Tokyo Olympics. She is also now playing in the LPGA, which she calls "the biggest stage in my life."

In her rookie season, Pagdanganan already made headlines for her power; her average driving distance of 283.07 ranks first in the tour. In October, she finished in the top 10 of the Women's PGA Championship and in the top three of the LPGA Drive On Championship.

Pagdanganan hopes that young Filipinos will see the results she's getting and be inspired to take up the sport as well.

"I want to play golf but my purpose is also to, you know, hopefully allow more kids to realize that golf is a great game and it can open so many more doors for you," she said.

There is still the matter of making golf more accessible to ordinary Filipinos, which is something that Pagdanganan's partners at Smart Sports are trying to do, in coordination with the MVP Sports Foundation.

"There's a challenge with golf," said Jude Turcuato, head of Smart Sports. "Having access to golf, you would need some resources."

"That's something that definitely, we're trying to bridge that gap, somehow," he added. "That's one of the purposes, not necessarily for Smart per se, but for MVP Sports Foundation, that's one of the mission that we have for every sport."

This article was originally published by ABS-CBN News.