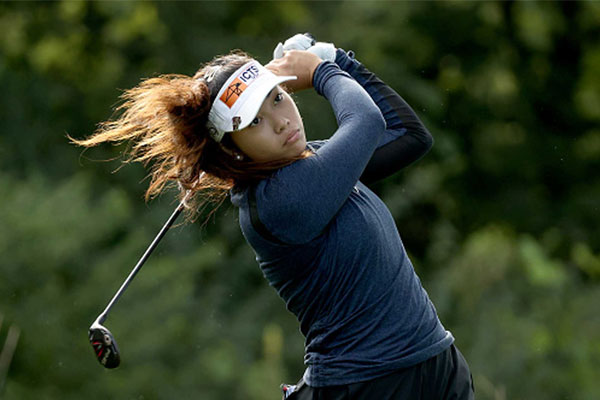 After a solid showing in her first year in the LPGA Tour, Filipina golfer Bianca Pagdanganan is looking forward to an even better campaign in 2021 -- one that hopefully includes a stint in the Olympic Games.

The 23-year-old Pagdanganan impressed in her rookie season, finishing in the Top 10 of the KPMG Women's PGA Championship in October and earning a slot to the US Women's Open in December. She has accumulated over $200,000 in career earnings after just one year on tour.

In a press conference Tuesday where she was unveiled as the latest ambassador of Smart Sports, Pagdanganan said she aims to keep improving and gain more Top 10 finishes this year -- but also to represent the Philippines in the upcoming Tokyo Olympics.

"For me, playing for my country is always one of the greatest things that golf has given me," said Pagdanganan, who burst into the scene after helping the Philippines win team gold in the 2018 Asian Games, while also securing individual bronze.

"Not everyone is given that chance. It's just different when you're playing for something bigger than yourself," she added. "It's always been a goal of mine to play in the Olympics."

Qualifications for the Tokyo Games is based on the Olympic Golf Ranking, where 60 players will make the cut. A maximum of four players per country can compete in the Summer Games, which have been rescheduled to 2021 due to the COVID-19 pandemic.

As of the latest rankings, Pagdanganan is one of two Filipinas who will qualify to the Games, along with Yuka Saso, who won individual gold in the 2018 Asian Games and has emerged as a rising star in the LPGA of Japan Tour last year.

The qualifying period ends on June 28.

Philippine sports officials have repeatedly expressed their optimism that the country can finally earn a breakthrough gold medal in the Olympics in Tokyo, and Pagdanganan believes that the mint can come from golf.

Asked if it's realistic for the Philippines to win an Olympic gold medal in golf, Pagdanganan said: "I think it's important to aim high, and I think that's possible."

"Seeing how we played throughout the years, the Southeast Asian Games, the Asian Games, I think we do have a good chance, especially with the players that we have now, in the moment," she explained.

"I think we have a good chance and that would be pretty cool if golf can give us a gold medal."

The women's golf competition in the Tokyo Olympics is scheduled for August 4-7 at the Kasumigaseki Country Club.

This article was originally published by ABS-CBN News.