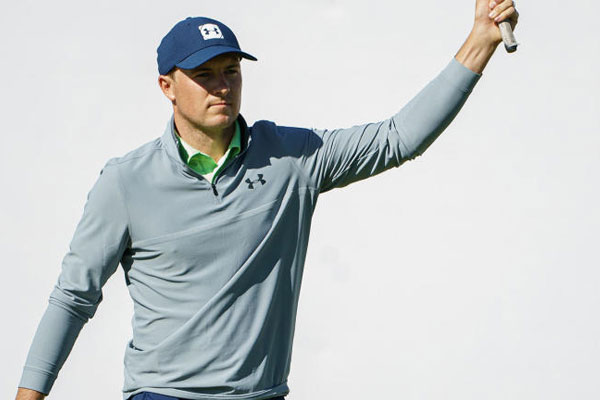 Brooks Koepka has a knack for losing golf tournaments even when he holds the trophy at the end of the week. This is not his fault, of course, but it seems to be a bit of a pattern. The most famous example was at the 2018 PGA Championship when Tiger Woods nearly won his first major in 10 years. Koepka actually won that event at Bellerive, but I'm not sure anyone there remembers that.

Most recently, Koepka took the 2021 Waste Management Phoenix Open by a stroke over Xander Schauffele and K.H. Lee, but those who attended both days on the weekend likely won't remember much of what he did (unless they were on hand for his startling chip-in on the 17th hole on Sunday). Instead, they will remember Jordan Spieth's improbable 61 on Saturday and the way he summoned something short of magic but beyond the realm of normality as he tried to win for the first time since 2017.

The questions during Spieth's Saturday soiree were singular and connected. How low can he go? How high can a sport take its fans? They are essentially the same question even if they have different endpoints. Nothing else mattered as he hit bombs on Nos. 16 and 17 and roused the slumbering legend that many (raises hand) believe is still slinking around beneath the surface of his being. I mean, nothing else in all of sports mattered for those four hours in Round 3.

I was supposed to be off on Saturday afternoon to ostensibly spend some time with my family and prepare for a long Sunday of watching European Tour and PGA Tour golf for most of the day. Unfortunately, I turned the TV on around 3 p.m., and I never turned it off. Kids were running in and out of the house, and I terrified a handful of them with the roar I emitted from my couch when the putt on No. 17 fell and Spieth pointed across the pond. It felt like he was pointing across the damn Red Sea into an unknown but hopeful future.

Normally, this excitement is funneled into columns like this one or often into one-line jokes or exaggerations on Twitter. With Spieth, though, there is so often spillover outside of the parameters of what my job is supposed to be about. So it goes for most folks watching him for the past eight years. There's a reason AT&T, Coca-Cola and Under Armour inked those checks. I don't understand all the machinations of it, but I do know that a balding 27-year-old whose features are more featureless than anything else can stir the embers of affection for this stupid sport more than nearly every other human who has gone before him.

But as is the case with all memorable weekends in life, questions must be asked about the future. Most pertinently, "What's next?" In Spieth's case, it runs a little deeper than that. Because of his history and because of the past three years of him playing the role of Moses and wandering in the desert and because he's Jordan Spieth, "Is this sustainable?" is probably the better query.

Let's be clear about what happened at TPC Scottsdale. Spieth was horrific off the tee, which has been the story of his last few years (he said he "got away with murder" in Round 1). He finished 64th (of 66) in strokes gained off the tee and in nearly the same spot in distance from the edge of the fairway on missed fairways. In other words, his big misses were massive. This obviously caught up to him on Sunday when he hit Barry Zito-like shots into the water on both No. 15 and No. 17, and his tournament was a wrap.

Want the sharpest DFS advice, picks and data-driven golf analysis? Listen below and subscribe to The First Cut Golf podcast where we explain what's happening on the course so you can win off of it, including a complete recap of the 2021 Phoenix Open below.

The two things that stand out most about his driving are interrelated. The first is that if you're that sickly off the tee, you have to be nearly the best player in the world with every other club to win golf tournaments (we'll get to that).The second is that certain golf courses are going to completely destroy you. You can, in theory, get away with this atrocious driving display at TPC Scottsdale or even at a place like Augusta National. But if you take it to a U.S. Open or, say, a PGA Tour event played at a U.S. Open venue like last week's Farmers Insurance Open, you have no chance.

So if this play is going to be remotely sustainable, the driver has to get better. Not standard deviations better but at least a little bit better. If Spieth is just field average or slightly above it like a Webb Simpson or Russell Henley, he can contend for and win golf tournaments.

Which brings us to the second part of this formula: every other part of his game. While it's true that Spieth made some long putts over the weekend and that was exciting and fun to watch, the reason he contended all week is because he hit his irons, according to Brandel Chamblee, "like a god." Spieth finished first in the field (ahead of Koepka) by a wide margin in approach play. This is the dirty little secret of Spieth's run from 2014-2018, when he won 10 times, including three majors. In that span, he was a top-15 iron player in the world. It's statistically impossible to win 10 times without being elite from tee to green, and because Spieth was never a great driver, he leaned heavily on his iron play (and it delivered).

Here's the good news. Spieth has strung together six straight rounds of positive strokes gained with his irons, which has not happened since the end of 2018. If he's contended since then, it's been because he's putted his brains out, but that cannot last. The iron play can, though, and it seems that a trend is developing, though his play at Pebble Beach next week will be telling.

"I'm really excited about the progress that has been made in the first two weeks," Spieth said on Sunday. "It is far from where I want it to be as far as how it feels, but, boy, I was debating not even playing this week, dropping out on Friday afternoon last week. So I just wanted to potentially go home, and felt like I was really far from where I needed to be. This golf course in general isn't a great golf course for me historically, so I thought I could then go in to Pebble a little fresher. Boy, I'm glad I came."

Jordan Spieth is not back. Hold the declarations. And while it's silly to try and predict the next year or two years, or even two months based on a few days of good post-tee shot play in the desert, there is reason for optimism for Spieth. His iron play has been solid. His short game has been more or less the same his entire career. And while his putter comes and goes, this time last year it was not absurd to say Spieth was the best putter on the planet. It's not the putter that's a concern. It's whether his driver can be average and whether he can again become a top-10 iron player in the world.

In the end, Spieth should -- I cannot believe I'm saying these words -- aim to be Patrick Reed. Their statistics are alarmingly similar throughout the course of their careers, though Spieth has always been a much better iron player, and Reed contends multiple times a year (and usually wins at least one of them) with a decent-but-not-great driver. Since the start of 2013, here's how their numbers stack up, according to Data Golf.

Spieth is a long way from positive strokes gained off the tee, but if he can get there, the rest of his game seems to be at least in the neighborhood of being good enough to again be a top-25 player in the world. I don't know that he'll ever be that no-doubt No. 1 player on earth like he was at times from 2015-2017, but I also don't know that he needs to be.

Spieth is five (!) years younger than Rickie Fowler. There is so much runway left, so much time to figure it out. And if the unintentional byproduct of one of the all-time greats to this point in his career is that we get glimpses like we got on Saturday on his way back from oblivion, then who wouldn't sign up for that? Because while you might not understand why when he raises his Scotty Cameron like a private-jet-flying Harry Potter raising his wand, you feel that something special is happening or is going to happen. All that matters is that something special is almost certainly going to happen. Just like it did on Saturday. Just as it has so many times before.

This article was originally published by CBSSport.com