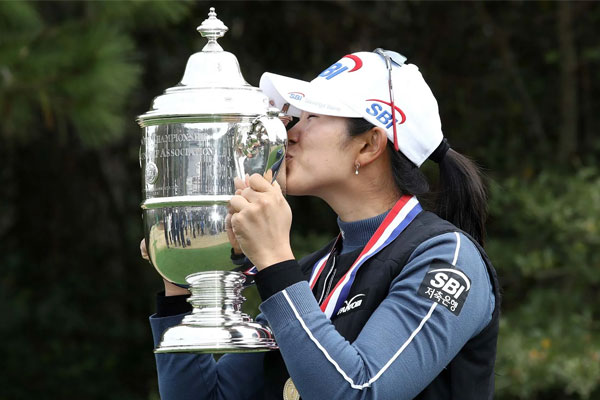 Texas-sized comeback: Inside A Lim Kim’s historic charge at the U.S. Women’s Open

HOUSTON — Players saw a little bit of everything at the 75th U.S. Women’s Open. Sun-splashed skies graced the Houston area early in the week while the weekend brought heavy rain and mud balls. By Monday, the temperatures dropped into the low 40s and players broke out earmuffs and mittens.

Welcome to winter in Texas.

By the time it was over, A Lim Kim emerged victorious. And it only seems fitting that the 2020 champion donned a mask throughout her triumph.

It was a quiet day at Champions Golf Club for the Monday finish — a first for the championship since 2011. The whole week was muted, really, with no fans on site for the final major of this strangest of years. But by Monday, only a bare-bones crew remained to see it to completion.

Save for the occasional ping of a driver or click of a well-struck iron, the only sounds were camera shutters, fallen leaves crunching under foot and planes flying high above the clouds overhead — an appropriate finale to a golfing year marked by eerie silence.

That silence was only broken when Kim, seated in player dining with her entourage, watched on TV as Amy Olson’s approach on the 72nd hole sailed wide, securing the 25-year-old South Korean’s first major victory.

Kim began the day five shots off the 54-hole pace set by Japan’s Hinako Shibuno, and for much of the day it looked as though her U.S. Women’s Open debut would end with a respectable top-10 finish, but several shots short of the podium.

Her front-nine finish included birdies in three of the final four holes, but after she bogeyed 10 and 11 and dropped to even par, her chances to lift the trophy looked slim at best. Kim parred the next four with time running out to catch Olson, who, despite playing with a heavy heart, put on a mid-round ball-striking clinic that made her look unbeatable. Then, Kim stepped to the 16th tee.

Of the 281 strokes Kim made at Champions this week, her tee shot at the par-3 16th was perhaps the most consequential. Standing 182 yards from the flag, Kim unleashed a towering 5-iron. It took two hops, a skip and rolled within feet of the hole.

That birdie got Kim back into red numbers and sparked a closing stretch that will go down in the annals of the sport.

Cruising off the momentum from that birdie, Kim fired her 8-iron approach on the penultimate hole to within a foot of the cup. By the time she addressed her pitching wedge approach on No. 18, there was little doubt that she would soon be staring down yet another birdie look.

When her final putt dropped, Kim finally let some emotion show, fist-pumping as she posted her stellar three-under 67.

“It’s been 25 years since someone came from five behind to win the U.S. Women’s Open,” analyst Brandel Chamblee said during Golf Channel’s post-tournament coverage. “What she did today was stand up at the biggest moment of her life and do something that, well, you’d have to rack your brain to come up with anything comparable.”

With her 2-3-3 finish, Kim became the first player this week to birdie Nos. 16-18 on the Cypress Creek course. Her finish evoked Charl Schwartzel’s four-straight birdies to close out the 2011 Masters.

According to Kim, she did know her positioning heading into that pivotal stretch.

“I (was) eyeing the leaderboard throughout the round and I knew how many shots I was back,” Kim said. “That’s probably the reason why I tried to hit more aggressive — tried to more attack the pins.”

If you had asked Kim her expectations for the championship a week ago, it’s unlikely she’d have expected a high finish — let alone to take home the $1 million winner’s check. Her native South Korea does not have the same Bermuda grass that stretches wall to wall at Champions, and it took her several days to get used to the flora.

This article was originally published by Golf.com