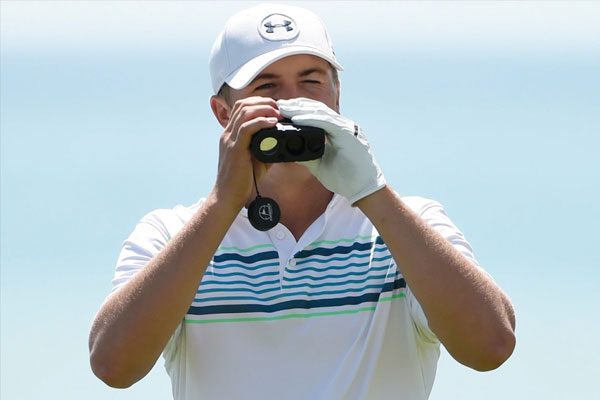 Jordan Spieth uses a laser rangefinder during a practice round at the 2015 PGA Championship. (Photo: Michael Madrid, USA TODAY Sports)

Pros can use laser rangefinders, GPS at PGA Championship, other PGA of America majors

The devices will first make an appearance at the PGA Championship, May 20-23 at Kiawah Island Golf Resort’s Ocean Course in South Carolina.

“We’re always interested in methods that may help improve the flow of play during our Championships,” Jim Richerson, president of the PGA of America, said in a media release announcing the news. “The use of distance-measuring devices is already common within the game and is now a part of the Rules of Golf. Players and caddies have long used them during practice rounds to gather relevant yardages.”

The PGA of America becomes the first major body to allow the devices in all its premier professional events. There has been speculation for years that such devices might help speed play, as players and caddies won’t have to walk off yardages to sprinkler heads and other fixed positions.

The Unites States Golf Association’s Rules of Golf have allowed the use of laser rangefinders and GPS devices in casual play and tournaments since 2006, but a local rule allowed a tournament committee to ban such devices. At elite professional levels of play, the devices still have not been embraced for competition rounds, though they have been allowed in the U.S. Amateur since 2014. They are still not allowed during competition rounds at PGA Tour events or at the U.S. Open and British Opens.

In keeping with Rule 4.3a (1), the devices allowed can report only on distance and direction. Devices that calculate elevation changes or wind speeds, or that suggest a club for a player as well as other data, will not be allowed.

The devices won’t be new for the pros, many of whom already use laser rangefinders and GPS in practice rounds.

It’s likely laser rangefinders will prove more popular than GPS devices, as they more easily provide an exact distance to a flag on the green, often with accuracy to within a yard at normal approach-shot distances. GPS devices typically provide more generalized information on holes. It is possible a player could use both styles of devices, and several new products incorporate both lasers and GPS.

Many laser rangefinders provide information on elevation changes and “plays-like” distances. Most of those devices come with a switch to turn off such information, but many elite players opt for devices that do not provide elevation and other data as a precaution against forgetting to turn off those functions.

This article was originally published by Golf Week.