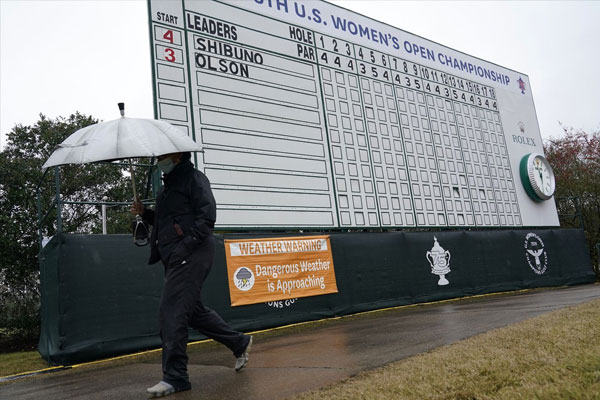 A person carries an umbrella while walking next to a sign advising that play is temporarily suspended during a weather delay in the final round of the US Womens Open golf tournament.DAVID J. PHILLIP/ASSOCIATED PRESS

Monday thriller up for US Women's Open

Stormy weather and unplayable conditions at Cypress Creek of the Champions Golf Club in Houston, Texas forced the organizing US Golf Association to move the final round of the US Women's Open to a Monday finish, giving leader Hinako Shibuno and the rest of her pursuers an extra day to plot their game plans and recover what is there to recoup after a punishing third round.

But whether the delay could work wonders for Shibuno and her at least eight other bidders, only time will tell as the finale promises to be nothing but a thriller with so much at stake, including the hefty $1 million top purse, in the world’s premier women’s golf championship.

Shibuno, who bucked the odds to hold on to a one-stroke lead over American Amy Olson despite a 74 Saturday for a 209 total, is trying to become the first player from Japan to win the blue-ribbon event.

The ever-smiling 22-year-old shotmaker is likewise seeking to become only the third player after Se Ri Park and in Gee Chun of South Korea to win two Majors as their first two LPGA Tour titles.

Olson, who spiked her first round leading 67 with an ace, matched par 71 in moving day to threaten at 210. She is hoping to become the first American to earn first win as LPGA Tour player in US Women’s Open since Hilary Lunke in 2003.

Moriya Jutanugarn, out to match sister Ariya’s feat in 2018, is just two strokes adrift at 212 after a 72 while Korean Ji Yeong Kim2 produced the best score in a punishing day, a 67 that pulled her from tied 47th to joint third with the Thai ace.

Eight flights, including the championship troika of Shibuno, Olson and Jutanugarn, were stranded while play among the rest of the surviving 66-player field was halted due to approaching thunderstorm.

They included Yuka Saso, who posted a over-card after five holes when play was stopped.

The ICTSI-backed Saso made quite an impression with a 69-71 start to stay at Top 6 but lost control of her game in the pivotal third round and limped with a 77, dropping to joint 32nd with seven others at 217, eight shots off Shibuno.

But no lead is safe in a US Women’s Open finale where handling the pressure is paramount as coming up with great shots and putting with the likes of Kiwi Lydia Ko, Ariya Jutanugarn, Yealimi Noh, Megan Khang and amateur Kaitlyn Papp of the US just within striking distance at 213.

World No. 1 Jin Young Ko also moved in contention at 214 in a tie with fellow Koreans A Lim Kim, Hae Ran Ryu and world No. 2 Sei Young Kim, guaranteeing an explosive ending in a survival of the fittest.

But Shibuno is more than ready to take them all.

“Tomorrow (Monday), the temperature will be about 10 degrees lower that today (Sunday) so I think the distance will change. But I hope I can do my best again,” said Shibuno. Jeanne Cortez