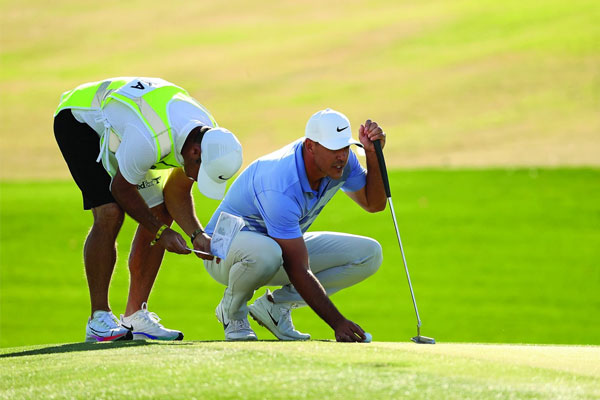 BROOKS Koepka battles back from injuries to win the Phoenix Open, his first title since 2019. ABBIE PARR/AGENCE FRANCE-PRESSE

Four-time major winner Brooks Koepka grabbed two eagles — including a chip-in at the 17th hole — to win the Phoenix Open for his first US PGA Tour title since 2019.

Koepka returned to the winner’s circle at the same TPC Scottsdale course where he won the first of his eight US PGA Tour titles back in 2015, posting a six-under par 65 for a 19-under total of 265.

He finished one stroke in front of South Korean Lee Kyoung-hoon, who carded a 68, and American Xander Schauffele, who shared the overnight lead but settled for an even-par 71 and his eighth runner-up finish since his last win in January of 2019.

Koepka, who rose to No. 1 in the world on the strength of four major titles over 2017, 2018 and 2019, battled through a 2020 season disrupted not only by the coronavirus pandemic but also by nagging knee and hip injuries that prevented him from playing the PGA Tour playoffs and the delayed US Open at Winged Foot in September.

“It has been a wild ride for the last year and a half and it’s very frustrating,” said Koepka, an often taciturn competitor who acknowledged he’d had some “dark moments.”

“I’ve had moments where I didn’t know if I was going to be the same, if I could even come back,” he said.

Although he hadn’t scored well in two prior 2021 starts, Koepka said he felt his game was coming around.

He put himself in striking distance of 54-hole leaders Schauffele and Jordan Spieth with four birdies to close his third round, and bounced back from a bogey at the 12th on Sunday with his first eagle of the day — a 24-footer at the third.

And he leaped to the top of the board with his eagle at the short par-four 17th, where his chip from 97 feet out took a couple of hops and rolled into the center of the cup.

“I felt like the chip, if I just caught it right in the fringe it was going to check up on me, and it did perfectly.”

“Took a nice little right kick for me, and didn’t look anywhere else but the hole.”

“Hell of a week,” added Koepka, who like all in the field relished the presence of 5,000 fans a day — the most at a PGA Tour event since the coronavirus pandemic exploded.

It was a far cry from the norm for a tournament that usually attracts some 700,000 over the course of the week, but it was enough for Koepka to enjoy a rousing cheer when his eagle landed at 17.

“I’ve missed fans,” Koepka said. “Just being around fans is something else. I love it.”

This article was originally published By Agence France-Presse.