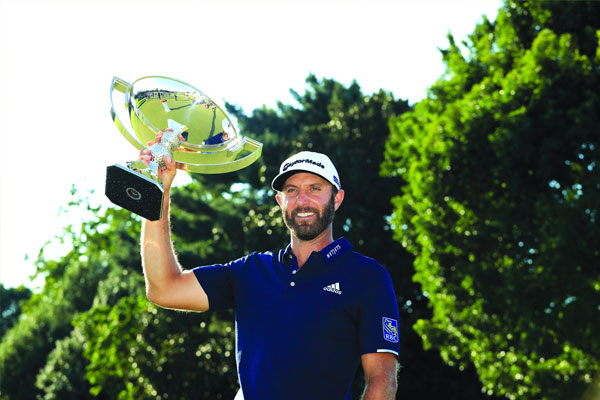 World No. 1 Dustin Johnson says he’s “excited” for the rest of the season after his imperious run of form continued when he won the Saudi International for the second time in three years on Sunday.

The 36-year-old American, who finished runner-up here last year, shot a two-under par 68 in tricky conditions to tally 15-under par 265.

That eventually proved to be two shots better than the group in tied second place at 13-under par — England’s Justin Rose (65) and American Tony Finau (67).

It was Johnson’s third win in eight starts since winning the Northern Trust Open on the PGA Tour, a run that includes his Masters triumph as well.

His only finish outside the top-10 since finishing runner-up in the PGA Championship in August last year is a tied 11th place at this year’s Tournament of Champions in Hawaii.

“It’s definitely nice to get a win in an event that is not on my tour. After Augusta, to get my first win, obviously, the game’s still in really good form and I’m really excited about the rest of the year,” Johnson said.

“I was very pleased with the way I was swinging the club. I felt like I really controlled the golf ball well in some windy conditions. I drove it well.”

“I did everything really well except for holing some putts. I am proud of winning when I didn’t feel like I was completely on all cylinders as far as where everything was working well.”

Johnson started the round two shots ahead of Frenchman Victor Perez and even though he missed birdie chances from inside four feet on the 10th and 12th holes, he managed to stay ahead with a solitary birdie on the par-5 fourth hole.

Rose completed his bogey-free round with a birdie on the 18th, but Johnson’s closest challengers — Finau and Perez — made crucial mistakes coming down the stretch to give him enough breathing space.

This article was originally published By Agence France-Presse.