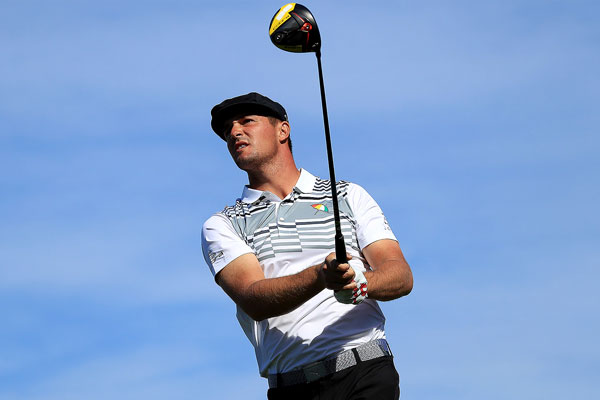 Like his experiment with a 48-inch shaft in his driver, Bryson DeChambeau made headlines last month when he said he would try to drive the green at the par-5 sixth hole at the Arnold Palmer Invitational.

“If I play this year I will definitely do it,” DeChambeau told Golf.com last month. “No. 6 at Bay Hill is one of those I’ve been eyeing. I think I can do some pretty cool things on it.”

The sixth hole at Bay Hill is listed at 590 yards but DeChambeau could cut the corner of the lake with a drive that would need to carry around 340 yards, which is well within the 27-year-old’s range. During the final round last year DeChambeau’s drive at No. 6 carried exactly 340 yards, according to ShotLink. He made par on the hole.

“It would be some effort,” Hatton laughed. “I know that’s not anywhere near my locker. If he can do it and he pulls it off in tournament ... fair play to him.”

Hatton pointed out how demanding the tee shot would be beyond the 340 yards of carry that would be required to avoid the giant lake that frames the left side of the hole.

“There’s not really a bailout. It would take a very brave man to do it and it would be interesting to see if he can pull it off,” Hatton said.

John Daly famously made an 18 on the sixth hole in 1998 at Bay Hill trying to cut the same corner.